Dr. Michael Rohan, fellowship-trained orthopedic spine surgeon, is now able to provide the latest motion-preservation device for those patients who need surgery to repair herniated discs in the neck.

Traditionally, the common treatment for repairing herniated discs in the neck was an Anterior Cervical Discectomy and Fusion (ACDF) procedure. In a fusion surgery, the disc is removed and either a bone spacer or a plastic implant is be placed in the disc space to restore disc height and remove pressure on the pinched nerves or spinal cord. A metal plate and screws are then placed on the front of the neck to hold the implant in place. The result of this procedure will be a segment that no longer moves, or is “fused”. 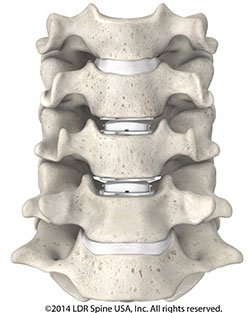 In the low back, because of the number of vertebrae, this loss of movement is less of a problem as the remaining vertebrae can provide enough rotational movement. “In the neck, however, there are fewer vertebral bones,” explains Dr. Rohan. “When two vertebrae are locked together as in the ACDF surgery, not only does the person notice that they have less rotation in the neck after surgery, but other issues also come into play. Because two vertebrae are locked, the other vertebrae above and below have more stress on them, which can in turn cause additional disc herniations in the remaining segments.”

Over the past decade, several artificial discs for the neck have emerged and have worked well for single level disc herniations in the neck. However, none of these previous artificial discs addressed the patient who might have disc degeneration at two levels. Those patients were not addressed by the other implants.

In 2015, Dr. Michael Rohan at Northwest Florida Spine is using the latest advance in artificial discs for the cervical (neck) area: Mobi-C® artificial disc. Mobi-C® is the first and only cervical disc replacement device to receive FDA approval to treat both one-level and two-level cervical disc disease. Mobi-C® is different from other cervical discs because of its bone sparing technique, which eliminates the need for bone chiseling and drilling, and optimizes it for two-level applications.

“With any artificial disc surgery, the surgeon must make room for the new implant that then replicates the movement and rotation of the original disc,” explains Dr. Rohan. “This involves some chiseling of the existing bone. The new Mobi-C® implant significantly reduces the amount of bone that is affected so you are preserving much more of the vertebral body.

Like all artificial discs, the advantages of the Mobi-C® device over fusion is that the neck maintains normal motion and reduces the stress placed on the other discs in the neck. The goal with motion preservation is to retain the normal rotation of the neck and lessen the need for any future surgery at other levels in the neck.

The history of the artificial disc for spine

While this technology was somewhat new in our country at that time, artificial discs had been in use in Europe for more than 15 years before that.

The FDA tries to regulate the use of new technology and drugs to provide time to study if these innovations actually provide some benefit to patients, and to determine if any innovations are harmful to patients.

For example, the models of artificial discs approved by the FDA for use in the United States are expected to grow as new models emerge on the scene and surgeons become trained in their use.

In addition, other artificial disc models are available on a limited basis through “clinical trials” where a patient agrees to be part of clinical study designed to measure the success of a new disc model, which will be part of an FDA study. Patients who participate in a clinical trial can gain access to the most current technology, even though it has yet to gain FDA approval for use in the U.S.
[Top]

Pursuing an alternative to fusion surgery

The artificial disc concept is intended to be an alternative for spinal fusion surgery. Each year in the U.S., more than 200,000 spinal fusion surgeries are performed to relieve excruciating pain caused by damaged discs in the low back and neck areas.

During a fusion procedure, the damaged disc is typically replaced with bone from a patient’s hip or from a bone bank. Fusion surgery causes two vertebrae to become locked in place, putting additional stress on discs above and below the fusion site, which restricts movement and can lead to further disc herniation with the discs above and below the degenerated disc. An artificial disc replacement is intended to duplicate the function level of a normal, healthy disc and retain motion in the spine.

When a natural disc herniates or becomes badly degenerated, it loses its shock-absorbing ability, which can narrow the space between vertebrae. In fusion surgery, the damaged disc isn’t repaired but rather is removed and replaced with bone that restores the space between the vertebrae. However, this bone locks the vertebrae into place, which can then damage other discs above and below.

A common aspect of all artificial discs is that they are designed to retain the natural movement in the spine by duplicating the rotational function of the discs Mother Nature gave us at birth. Most artificial disc designs have plates that attach to the vertebrae and a rotational component that fits between these fixation plates. These components are typically designed to withstand stress and rotational forces over long periods of time. Still, like any manmade material, they can be affected by wear and tear.

Benefits of using an artificial disc vs. fusion

Some of the main benefits of the artificial disc parallel that of knee replacement and hip replacement. This can include the following benefits:
An artificial disc in the neck or back, in principle, is designed to retain motion in that particular segment of the spine.
It prevents degeneration of disc levels above and below the affected disc
There is no bone graft required
There can be a quicker recovery and return to work or activity
It can be a less invasive and less painful surgery than a fusion
There can be less blood loss during surgery
[Top]

A second issue relates to the ease of the artificial disc surgery and any necessary revision surgery to replace a worn out artificial disc. Because the surgeon must access the front of the spine, an incision is made in the abdomen for lumbar discs and in the front of the neck for cervical discs. Generally speaking, it is easier and safer to access the herniated disc in the neck than it is to access a herniated disc in the low back by maneuvering around internal organs in the stomach area.

Other issues to consider

When treating knee and hip replacement patients, the best orthopedic surgeons try to postpone the implantation of an artificial joint until a patient is at least 50 years old so that they do not outlive their artificial joint, which typically lasts anywhere from 15 to 20 years. Revision surgery, which may be necessary to replace a worn-out artificial joint, can be complex.

There is also the same concern with the artificial disc for the back and neck.

In summary, the best spine surgeons are cautious about the use of artificial discs for the following reasons:

Generally, the technology is very promising. Your spine surgeon can provide information if your problem can be addressed with this technology.

Northwest Florida Spine specializes 100% in spine surgery. Dr. Michael X. Rohan, Jr. is featured on the national site CentersforArtificialDisc.com as an author on the subject of artificial disc replacement. Dr. Rohan, Jr. is referred back and neck pain patients from across the Florida Gulf Coast. Dr. Rohan, Jr. provides patients motion preservation surgical options to spinal fusion. The Centers for Artificial Disc web site has content specific to disc replacement options and alternatives to spinal fusion. If you’ve been told you need a spinal fusion, Northwest Florida Spine can provide a second opinion for neck surgery. Click here to visit the Centers for Artificial Disc.